The Effectiveness of Marine Based Fatty Acid Compound (PCSO-524) and Firocoxib in the Treatment of Canine Osteoarthritis. 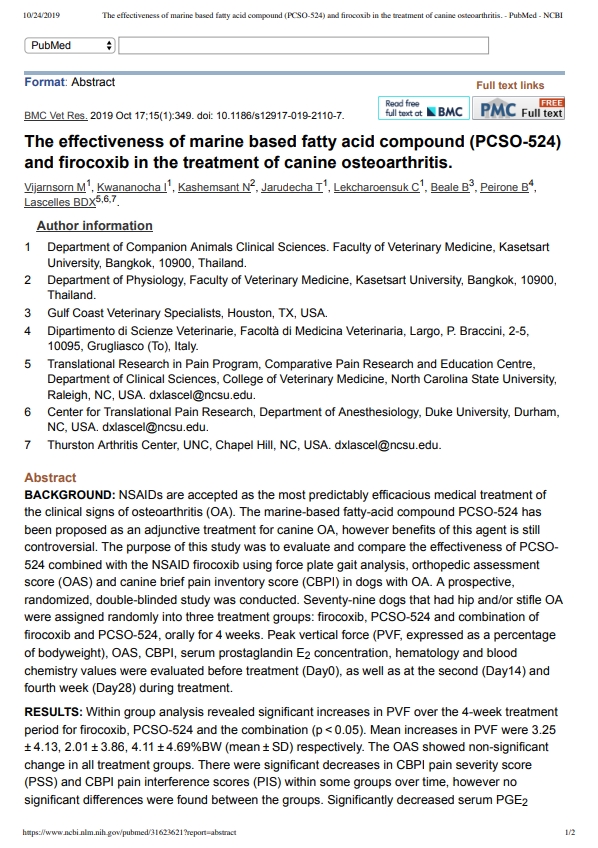 and 3) combination of Firocoxib and PCSO-524 for 28 days of  treatment.

Results showed overall that within-group comparisons saw a significant increase in PVF over the 4-week treatment period for all three treatments (Firocoxib, PCSO-524 and the combination group) (p<0.05).

The OAS showed non-significant changes in all treatment groups.

There were no significant decreases in CBPI Pain severity score (PSS) and CBPI interference scores (PIS) between groups. The concentration of serum PGE2 significantly decreased (p<0.05) in the combination group only.

The study also found significant increases in BUN and creatinine (p<0.05) compared to pre-treatment in the Firocoxib and combination groups, but not in the PCSO-524 group at day 28, but all other values in all dogs remained within the normal range.

Background: NSAIDs are accepted as the most predictably efficacious medical treatment of the clinical signs of osteoarthritis (OA). The marine-based fatty-acid compound PCSO-524 has been proposed as an adjunctive treatment for canine OA, however benefits of this agent is still controversial. The purpose of this study was to evaluate and compare the effectiveness of PCSO-524 combined with the NSAID firocoxib using force plate gait analysis, orthopedic assessment score (OAS) and canine brief pain inventory score (CBPI) in dogs with OA. A prospective, randomized, double-blinded study was conducted. Seventy-nine dogs that had hip and/or stifle OA were assigned randomly into three treatment groups: firocoxib, PCSO-524 and combination of firocoxib and PCSO-524, orally for 4 weeks. Peak vertical force (PVF, expressed as a percentage of bodyweight), OAS, CBPI, serum prostaglandin E2 concentration, hematology and blood chemistry values were evaluated before treatment (Day0), as well as at the second (Day14) and fourth week (Day28) during treatment.

Within group analysis revealed significant increases in PVF over the 4-week treatment period for firocoxib, PCSO-524 and the combination (p < 0.05). Mean increases in PVF were 3.25 ± 4.13, 2.01 ± 3.86, 4.11 ± 4.69%BW (mean ± SD) respectively. The OAS showed non-significant change in all treatment groups. There were significant decreases in CBPI pain severity score

(PSS) and CBPI pain interference scores (PIS) within some groups over time, however no significant differences were found between the groups. Significantly decreased serum PGE2 concentration (p < 0.05) was found in the combination group. Significant increases in BUN and creatinine (p < 0.05) compared to pre-treatment values were found in the firocoxib and combination groups but not in the PCSO-524 group at day28, but all values in all dogs remained within the normal ranges.

Conclusions: The results of this study suggested combination of both PCSO-524 and firocoxib is more effective in alleviation of inflammation and improvement of weight bearing ability when compared to the uses of either PCSO-524 or firocoxib alone. Further clinical studies are needed to confirm this, and to determine if there is any benefit of PCSO-524 over placebo.