PCSO-524® in comparison
with Mussel Powder 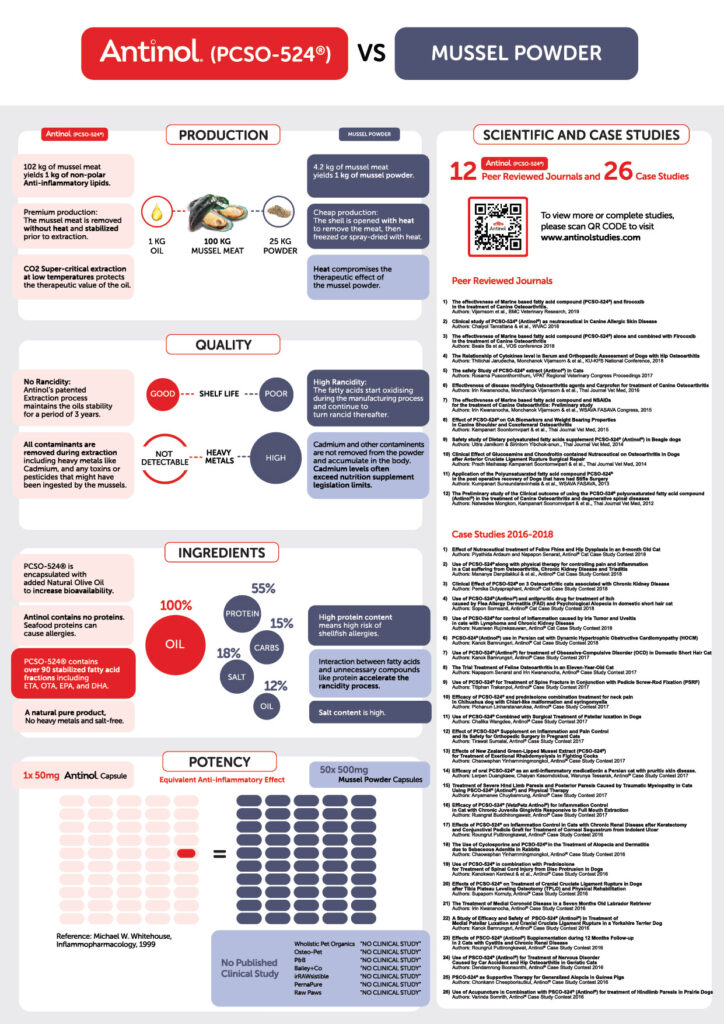 The 8 Case Studies from Antinol® Case Study Contest of 2020.

The diagnosis is based on histopathological test. The infection causes clinical lesion and chronic inflammation of the skin.

Long-term treatment is necessary with antifungal agents and anti-inflammatory drugs are recommended in case of severe inflammation.

Due to anti-inflammatory and skin enrichment effects of PCSO-524® (Antinol®), it is used for supportive treatment of feline dermatophytic pseudomycetoma in this case.

Administration of PCSO-524® (Antinol®) also reduces the risk of adverse effects from using other anti-inflammatory agents.

The use is simple and can reduce the dosage of other medications, particularly in difficult cats that do not cooperate with taking oral medicine.

Over one-year treatment period, there was no signs of side effects from the treatment, the blood test results were stable and the quality of life and social interaction between the cat and the owner was improved.

Overview: Patient was repeatedly hospitalised for treatment of CKD. But two weeks after Antinol® was added to treatment regimen, decrease in BUN, Are, and P level as well as improvement of appetite and activity was observed.

Overview: Patient was not responding to treatment but decrease in BUN and Creatinine (Are) levels were observed after Antinol® was added to treatment regimen.

A Persian cat aged 21 years was diagnosed with Dynamic Hypertrophic Obstructive Cardiomyopathy (HOCM) and treated with PCSO-524® (Antinol®) for 45 days.

The cat regained quality of life and daily activities such as grooming and walking, increased appetite, ingestion and weight gain after the treatment. Serum Amyloid A (SAA), which is an inflammatory marker in cats, was reduced down to normal after 15 days of PCSO-524® (Antinol®) administration.

The cat in this case was affected with skin disease caused by flea allergy dermatitis (FAD) and psychological alopecia.

Holistic treatment was the choice of treatment in this case. Medical treatment was applied to the cat and environments surrounding the cat was managed. PCSO-524® (Antinol®) in combination with other antipruritic drugs was used to relieve itch and inflammation of the chronic skin disease and to strengthen the skin.

During 210 days of the study, environment was managed and intensive parasitic control was applied to every cat in the house in order to control flea. The study showed efficacy of PCSO-524® (Antinol®) for treatment of skin inflammation, strengthening the skin, and itch relief.

During day 160-210 of the treatment, administration of other anti-itch drugs was terminated due to psychological alopecia that caused constant licking by the cat. PCSO-524® (Antinol®) was recommended in this case since it can be used for long-term treatment without adverse effects.

The study concluded that PCSO-524® (Antinol®) in combination with other antipruritic drugs and environmental management is effective.

Use of PCSO-524® Along with Physical Therapy for Controlling Pain and Inflammation in a Cat Suffering from Osteoarthritis, Chronic Kidney Disease and Triaditis

Administration of PCSO-524® and physical therapy were provided to reduce systematic and local pain and inflammation. The supportive treatment was continued for 15 months, during the first 2 months of which, the lumbosacral joint painwas reduced and then disappeared after 5 months. The control of elbow and knee joint pain was satisfied for the whole treatment period.

The cat was able to move the tail and resume normal walking after the 1st and 5th month of the treatment, respectively. Ability to jump and climb returned in the 5th and 8th month. However, the cat had improved defecation within 3 months. Testing of feline pancreatic lipase and serum amyloid A showed normal levels after 7 months of the treatment.

A neutered male Domestic Shorthair cat aged 8 years was infected with FIV and diagnosed with nasal submucosa-T-cell lymphoma that was positive to CD3.

Two weeks later, the size of tumor remained constant, the inflammation degree was reduced but creatinine level was increased. Administration of oral prednisolone, not the eye drop, was then terminated. Uveitis of the right eye was diagnosed and also fibrin in the anterior chamber and tumor of the iris were found in the right eye. Prednisolone acetate 1% eye drop was prescribed for both eyes.

The inflammation of both eyes still existed after 1 month of the prednisolone treatment. Green Lipped mussel extract, PCSO-524® (VetzPetz Antinol®, DKSH, Thailand), 1 capsule per day was then prescribed as an alternative of steroidal medication for control of inflammation, together with the prednisolone acetate 1 % eye drop in both eyes.

After 30 days of the start of PCSO-524® treatment, the tumor of iris disappeared and the severity of uveitis was reduced in both eyes. 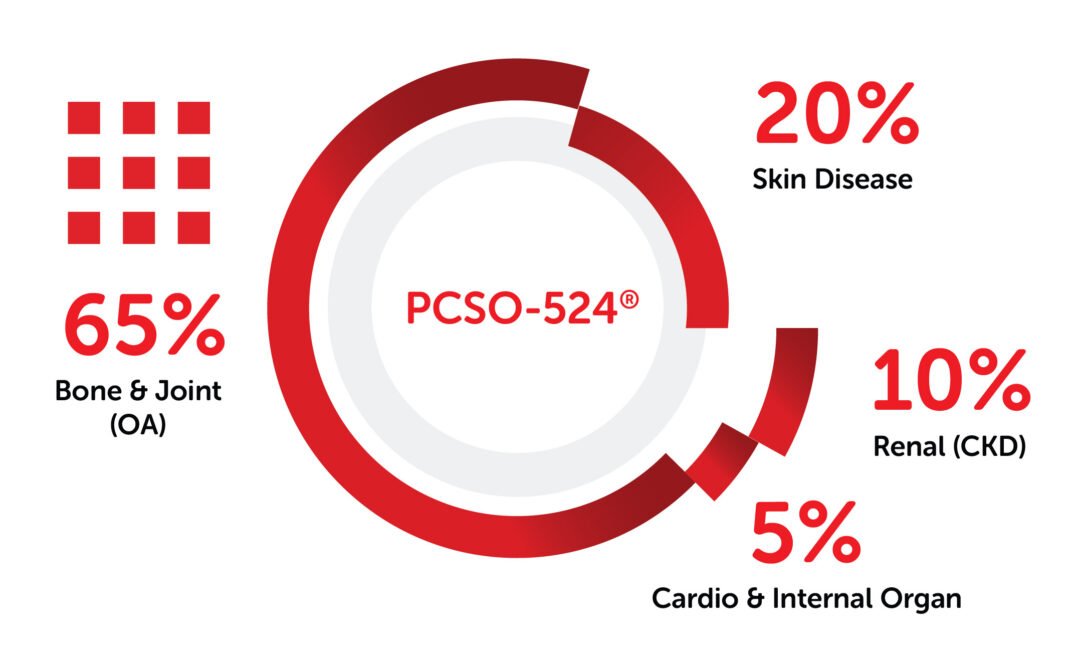